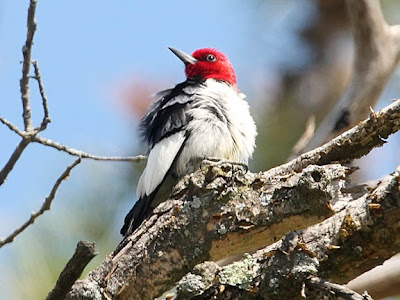 There are numerous species of woodpeckers that have red feathers on their head but there is only one truly red-head. The red-headed woodpecker is a mid sized woodpecker found in the eastern portions of North America. Their range runs from southern Canada in the north down to the Gulf Coast and from the Rocky Mountains east to the Atlantic Ocean. Birds that live in the northern third of the range usually migrate south in the winter in search of food. I photographed these red-heads at the Necedah NWR in central Wisconsin. 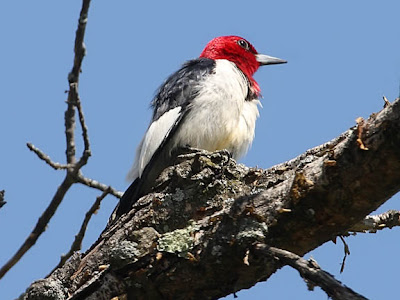 Red-headed woodpeckers are cavity nesters. Both male and female will work on excavating a cavity in a dead tree or snag preferably one with no bark left on it, or use an existing cavity. The cavity is typically lined with wood chips making a bed for the 4 to 8 eggs that the female will lay one egg per day. Both male and female will incubate the eggs, which takes about two weeks, and care for the chicks, which fledge around 27 to 28 days after they hatch. Both adults will also aggressively defend the nest and territory. They will often chase away other birds, not just other woodpeckers, and have been known to destroy nests or eggs of other birds nesting in the area. In parts of the range where there is a longer summer the adults may chase away the fledglings after they hatch and start a second brood. 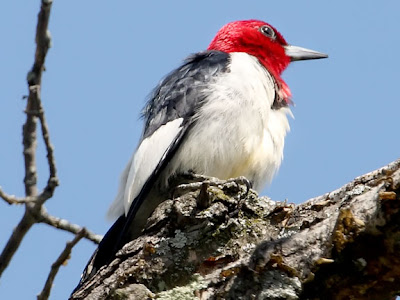 Red-headed woodpeckers are omnivores. They eat seeds, berries, fruit, nuts, acorns, eggs, chicks, mice and insects. Instead of boring into trees in search of insects, like most other woodpeckers, red-heads are more often to catch insects in the air or on the ground, especially grasshoppers. Red-heads are one of only four species of woodpeckers that are known to cache food. They will often tuck an acorn into a hole in a dead snag or wedge a live grasshopper in the crevice of a dead tree. They will then frequently cover their cache up with bark, which makes them unique in the world of woodpeckers. Since they rely heavily on dead trees for nesting cavities and cache locations their population has been in decline as people remove dead trees for ascetic reasons. Their population fluctuated positively, at times, when the number of dead trees increased, such as when North America went through the Dutch Elm epidemic. In the long run, however, their population has been on the decline, decreasing 50% since the late 1960's. This is mostly due to habitat loss and nesting site competition from non-native species.