Schpuzzle Of The Week:
The Wright stuff

This latter expression is often spelled with only 4 letters.
What are this word and expression?

The subject of a rural painting by an American artist contains two words and four wheels. Remove the last letter of the first word. In the second word, place duplicates of the second and and third letters in its fourth and fifth positions, but in reverse order.
Remove the space to spell what any resident of a certain U.S. state is called.
What is a resident of this state called?

What consumable product is the following sentence subliminally advertising? 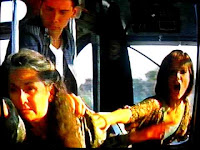 Hint: There are seven separate instances of the advertising in the text:
A mechanic begins engineering a format change on the Minnie Pearl Greyhound tour bus’s gyroscopic stabilization system after a roadie loses her balance during a dramatic hairpin turn as the bus, in a hailstorm intensifying, logs Joplin-to-Seneca, Mo. mileage.

Will Shortz’s June 18th NPR Weekend Edition Sunday puzzle, created by Mike Reiss, reads:
Think of a familiar hyphenated 7-letter word. The first 4 letters name a prominent American company, and the last 4 letters name a different prominent American company. What word is it?
Puzzleria!s Riffing Off Shortz And Reiss Slices read:
ONE:
Think of a Fortune 500 food company/corporation with a fun-to-say name that is also an informal interjection. When spelled backward this name is a Spanish adverb that intensifies what it modifies. What is this company? 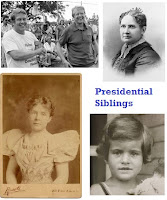 Name two prominent Fortune 500 companies/corporations that begin with the same letter of the alphabet. Replace the fifth letter of one of them to name what Mildred Wattigny opted to do in October of 1930... something that involved someone now enshrined in Cooperstown. Replace the first letter of the other to name a Chicago Cub who is enshrined in Cooperstown.
FIVE:
Name a somewhat prominent Fortune 500 corporation that promotes health and hygiene.
Replace its second letter with its final letter to form a deadly virus.
Name the same health-and-hygiene-promoting corporation. Replace its last two letters with a vowel and add some punctuation to form bacteria that can cause sickness.
What are this company, deadly virus and bacteria?
SIX:
Name a one-syllable shorthand expression for a car brand with a cross logo, followed by the screen name of a very-valued contributor to Puzzleria! The result is a prominent and “energetic” Fortune 500 corporation.
What is this corporation?
SEVEN:
Remove one letter from somewhat prominent Fortune 500 corporation to name something that is unbearably light, according to Milan Kundera.
What is unbearably light?