Houston, We Have A Problem. 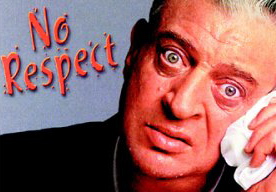 Yes, I’m afraid you do, oh fourth largest city in the United States.  Let’s be honest, if someone says the name of one of America’s three more populated cities, New York, Los Angeles, or Chicago, there is an immediate sense of energy in the air.  But mention Houston—the true energy capital of the world—and the enthusiasm meter flatlines.

"Smokey City" Pittsburgh, midday 1940I know that syndrome far too well, for I grew up in a place long-suffering from the same ailment: poor public image management.  To this day people ask me if Pittsburgh still is as smoke-filled as it was in the “old days.”  Since the skies over Pittsburgh have been clear since the late 1940’s, and Forbes Magazine (again) picked Pittsburgh as “America’s most livable city,” I’m not quite sure how to respond to such an ill-informed comment other than with a fist-pumping “GO STEELERS.”  [No offense intended to the wonderful folks of Green Bay, Wisconsin, but one must stick with one’s hometown football team in the Super Bowl, unless of course you happen to be the native Pittsburgher coach of the Packers.]

Sam Houston (1793-1863)
But this is not about expressions of civic pride for Pittsburgh.  This is about Space City/Bayou City/H-Town.  And there are at least a half-dozen more nicknames for that southeast Texas metropolis down by the Gulf of Mexico created by two New Yorkers (the Allen Brothers) in 1836 and named after the President of the Republic of Texas, Sam Houston.  Yes, Texas was indeed an independent country between 1836 and 1845 and some down here seem to long for those days to return.

As far as I can tell, Houston generally gets picked-on in one of three ways: for having hot humid summers, no zoning, and one of the fattest populations in the United States.  But the weather is really no different from Florida, there are beautiful residential communities to be found all over the city, and at least four other Texas towns rank higher than Houston on the “fat list.”  Besides, “Fat City” is the nickname for New Orleans. 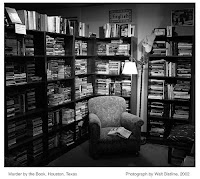 Murder By The Book, HoustonSo, why am I suddenly springing to the defense of a city I’m just coming to know? Answer: because it’s the right thing to do.  The fact my son and his family just moved there and I kicked off my book tour this week for Prey on Patmos at Houston’s wonderful Murder By The Book is purely coincidental.

What is the real Houston?  Let’s start off with a pithy description given to me by a Houstonian.  “Houston is Los Angeles without the pretensions.”  Having far more friends in Los Angeles than Green Bay, I hasten to say those are not my words, but at least it’s a place to start.

So, how do those two great cities compare?

Downtown HoustonThough both LA and Houston have distinct downtown areas, to get around either city you must live in your car because mass transit is virtually non-existent.  Nor does either have what most would consider traditional, neighborhood street life; rather each seems an amalgam of small towns connected by freeways.  Yes, Houston is flat while LA has its mountains and canyons, but that is a difference likely lost on most commuters plodding along on their respective, clogged rush-hour freeways.

Downtown Los AngelesOn the natural disaster front, LA has its earthquakes, Houston its hurricanes.  A tradeoff.

Both cities have terrific restaurants, shopping, and civic pride.  Both have lovely residential communities, though the price of a home in Houston is likely to be one-tenth that of a similar one in LA.

1956 film of Edna Ferber novelBut how can one possibly find a comparison in Houston to the glitzy intriguing world of LA’s Hollywood.  Simple, ever hear of Enron?  Yes, LA may have the movie business, but Houston has big oil, big gas, big medicine, and the U.S. Space industry.  When is the last time you heard a commercial on an LA radio station for Saudi Aramco oil soliciting teachers to relocate to Saudi Arabia?  Or on behalf of the C.I.A. offering career opportunities in the National Clandestine Services?  The stories filmed in LA arise out of lives lived in Houston.  [Okay, a bit dramatic, but you get the point.]

Stop! you say.  Everyone knows Houston is redneck, while LA is 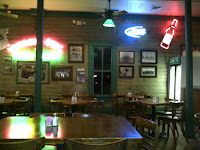 Houston's Wunsche Bros. in Old Town Spring chic and sophisticated.  Not sure what that means.  Yes, politics in Houston is more conservative than in LA, but isn’t the fairer measure of a people the way they treat others rather than the color of their necks?  Houston’s robust economy has and continues to welcome those fleeing difficult economic times elsewhere in the country, and let’s not forget how wide Houston opened its heart to the rush of New Orleans refugees fleeing the aftermath of Hurricane Katrina. 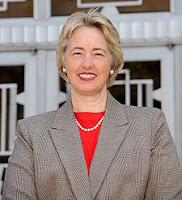 Honorable Mayor of Houston
And, oh yes, this redneck, conservative town just elected a new mayor, Annise Parker.  A Democrat, female, and the first elected mayor of a U.S. city with over a million residents who is openly gay—something NYC, LA, and Chicago haven’t come close to doing.

Now, about managing that public image thing…win a Super Bowl (or seven), it does wonders.

Downtown Pittsburgh todayBy the way, tonight (Saturday) at 5 PM I'll be at Poisoned Pen Books in Scottsdale, Arizona for a joint good time event and signing with Donis Case, Dana Stabenow, and Tina Whittle, and on Monday at noon I'll be at the Seattle Mystery Bookshop.  I'd mention my signing next Saturday at M is For Mystery in San Mateo, California, but I think I'll save that bit of BSP for next Saturday's piece.