What Powers Santa’s Sleigh? Contrivances Of Convenience; Santa Is In The House! Say The Elves, “Help Yourselves To Our Shelves!” Squid Pro Coho 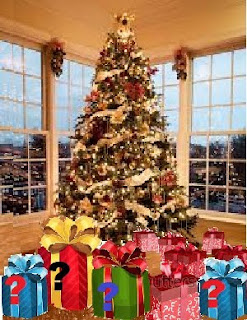 Welcome to our December 22nd edition of Joseph Young’s Puzzleria! We hope this week to help you have yourself a mystifyingly merry little Christmas. Under our pine puzzle-tree this year we have placed ten “riddle-wrapped-in-mystery-inside-of-enigma” gifts for you to unwrap:

6 ⇩⇩⇩⇩⇩⇩ Riffing-Off Shortz Slices that you ought to be able to “riff” the wrappings off of with convenience.
2 ⇩⇩ Appetizers: One, Donder and Blitzen, the other, “Ponder with wits, son,”

1 ⇩ Slice requiring that you conform comfortably and joyfully, and
1 ⇩ “Mother and Child Communion” Dessert.

As you unwrap your puzzle gifts, remember to toss the ripped-off wrappings and ribbons into a recycling bin. (We guarantee that none of our contents are recycled.)
And, as ususal, have lots of fa-la-la-la fun. 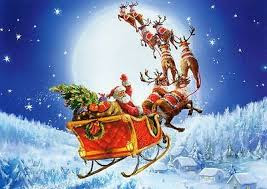 Just a few days ago, I tried to recall and reconstruct a Christmas verse that I originally penned probably back in the late 1950s when I was about 8 years old or so. It is titled “Santa’s sleigh.” No copies of my original verse, which was only about ten lines long, have survived, but I vaguely recall some of it reading:
“...The bucket seats are very near
To fuzzy dice and rearview mirror
And the stick shift, over here,
And underneath there is a gear...” 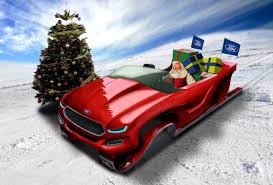 Okay, pretty insipid stuff, even for an 8-year-old. And painfully embarrassing for the  “adult me” to read. What’s worse, the rhyme scheme was just a tad monotonous: aaaaaaaaaa!
But the first two lines (which begin: “Santa’s sleigh from front to rear...”)  are not so bad. Indeed, I am actually somewhat proud of the second line.
And so, I resolved to rewrite a revised, 2017 version of “Santa’s sleigh,” but keeping its first two lines intact. It appears below. (The rhyme scheme, alas, is now even more monotonous: aaaaaaaaaaaa aaaaaa aaaa!) 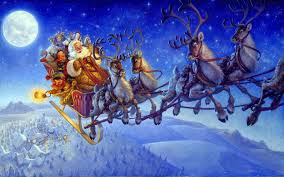 My challenge to you Puzzlerians! is to dredge back up from my past the last two words of the second line. The fourth word is an adjective; the fifth is a noun that I believe I coined... unless someone beat me to the punch before I was born.
Can you complete my second line?

Santa’s sleigh
Santa’s sleigh from front to rear
Is powered by _____ _________.
Its bucket seats are very near
To fuzzy dice and rearview mirror 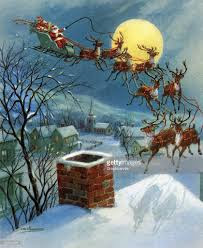 And reins that Santa needs to steer
His cervine creatures who are dear
To Santa... they’re his landing gear
For rooftop runways. Have no fear,
Your “captain” Santa has no peer
In piloting through snows severe
And shifting winds that may appear
To buffet Santa’s sleigh (“Oh dear!”).

But whether weather’s harsh or clear
A handy stick shift, over here,
Helps Santa Claus get into gear,
Which is his wont this time of year, 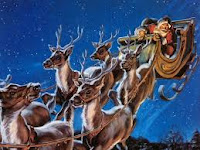 Dispensing joy and Christmas cheer
To each and every hemisphere.

So spend some time to lend an ear...
On silent nights you’re apt to hear,
“My ho-ho-holidays are near,
So Happy Yuletide and New Year!” 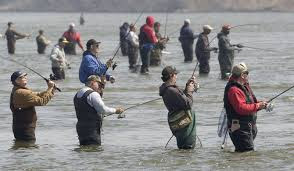 Name a somewhat controversial topic, in two words, that has lately been in the news. Replace the final six letters of this two-word phrase with an “s.” 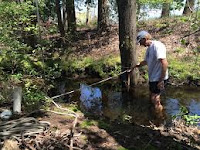 The result, spoken aloud, sounds like what aficionados of fish and amphibians might wade into a pond or lake to do. 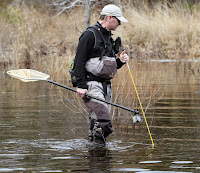 Hint: If you place an “e” somewhere within the six letters you replaced with an “s,” you will form a word for a television genre that tends to be entertaining rather than informative (even though the word misleads you into believing that shows in this genre will be informative).

What is the topic lately in the news? What might fish aficionados wade into a lake or pond to do? 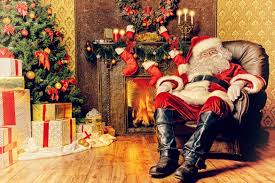 Santa is in the house!

Name a part of a house. Its spelling does not conform with what a word in the title of a particular Christmas carol seems to stipulate when it is sung aloud. 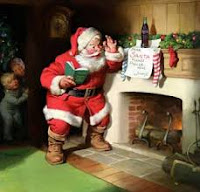 Alter the house part to make it conform with the word in the carol, then spell the result backward to name a house part associated with Santa Claus. 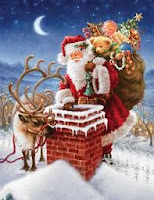 Riffing Off Shortz And Fogarty Slices:
Contrivances of convenience

Their names are otherwise unrelated. What two conveniences are these?
Puzzleria!’s Riffing Off Shortz And Fogarty Slices read: 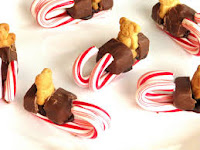 ONE:
Think of an edible sweet treat novelty introduced in the 20th century that is still around today, in two words that consist of its brand name and the type if edible it is.

Take the first two letters of the first word and the first three letters of its second word, in order, to get a name for a more nutritious and healthful edible that is roughly twice the size of the edible novelty. What are these edibles?
TWO:

Think of a vehicular convenience that became commercially available in the mid-20th century and which is still around today. Its name has two words.

THREE:
Think of a colorful electric convenience/invention introduced in the 20th century that is still around today. Its name has two words. 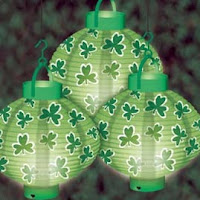 Take the first three letters of the first word and the first letter of its second word and interchange the second and third letters of these four letters to get the name of a “colorful electric” holiday.
What are this colorful convenience and holiday? 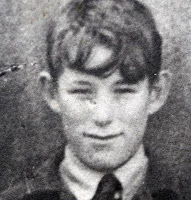 FOUR:
Think of a convenience invented around the turn of the 19th/20th century that is still around today. Its name has two words. Take the first two letters of the first word, in order, and the first two letters, but in reverse order, of its second word to name what this invention often produces when one uses it. What invention is this and what does it produce? 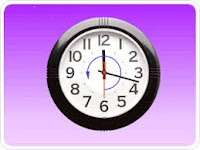 FIVE:
Think of a scientific instrument invented in the early 20th century that is still around today. Its name has two words. Take the first three letters of the first word and the first two letters of its second word, in order, to get the name of a company known for its advertising campaigns. What is this instrument? What company is this? 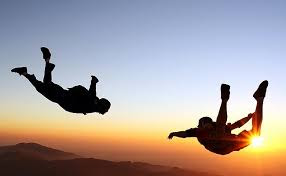 SIX:
Think of a recreational pastime invented in the 20th century that is still around today. Its name has two words. So does its inventor’s name.

“askew,” “lopsided,” “misaligned,” “cockeyed,” “crooked,” “leaning,” “haywire,”“oblique,” “askance,” “zigzag,” “catawampus” or “crosswise.”
What is this pastime? Who is its inventor? What is the word clued by all the above words?

Dessert Menu
Mother And Child Communion Dessert:
Say the elves, “Help yourselves to our shelves!” 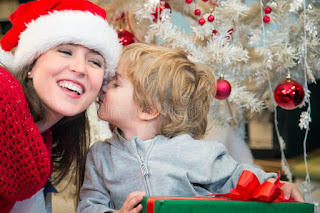 Joy owns a general store in a rural community, selling everything from soup to nuts to bolts to dry goods to wet vacs to notions to toys for girls and boys. At home, Joy has a girl and boy of her own – Jolie and Jay.
A two-word phrase that described Joy during the days leading up to Thanksgiving Day pertains to her store’s shelves. 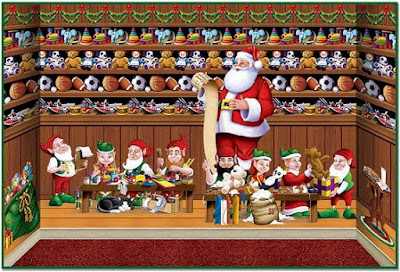 A two-word phrase that describes Joy during the days leading up to Christmas Day pertains to a popular Christmas tradition that Jolie and Jay have been told is performed by Santa’s elves.
The first words in both phrases have a suffix in common. The second words in both phrases also have a suffix in common. The two suffixed words in one 2-word phrase are the same as the two suffixed words in the other 2-word phrase, but in reverse order.
Phrase 1: Word 1 + Suffix 1, Word 2 + Suffix 2
Phrase 2: Word 2 + Suffix 1, Word 1 + Suffix 2
All suffixed words begin with the same letter. One word is also a rifle part. The other word, in a somewhat slangy sense, elicits “oohs and ahhs” on the basketball court and is also something with which an ace baseball pitcher is blessed.
Hint (and Extra Credit): The plural form of the two-word phrase that decribes Joy in the days leading up to Christmas Day also describes certain gifts Joy gives to Jolie and Jay. 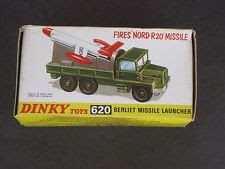 The first of these certain gifts that Joy brought home from her store, and placed where Jay would find it Christmas morning, is pictured here. When Jay found it he gave his mother a kiss.
What are the two two-word phrases that describe Joy on the days leading up to Thanksgiving and Christmans, respectively? Why did Jay give his mother a kiss?