I have finally made it to the point where I can begin the Yellowstone posts. After birding at Bowdoin NWR for the first part of the day Saturday we spent the rest of the day driving to Livingston, MT. Michelle had some issue with one of her eyes watering, I think that it was due to the dryer climate, so I drove most of the 6 hours or so while she slept. In Livingston we had some problems because the hotel changed franchises between the time I made the booking and the day we arrived. We spent about 20 minutes looking for a hotel that turned out to be right in front of us. We woke up early Sunday, grabbed some breakfast and then headed into the park. we decided to head out to Tower Junction and Lamar Valley first. When we visit Yellowstone in springtime, which we think is the best time to visit, we spend most of our time on the northern portion of the park, especially Tower Junction and Lamar Valley. 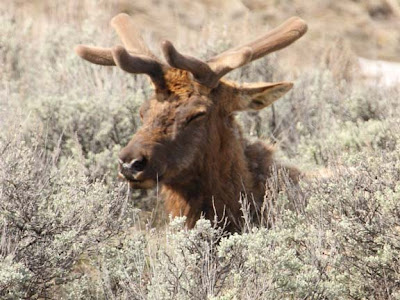 The first significant sighting that we had were these two bull elk out on Black Tail Deer Plateau. Male elk shed their antlers each year, typically in February or March. While they do not have horns, or while their new ones are growing in males will often travel together in groups which affords them some extra protection while they are more vulnerable. Later in the year, when the antlers have grown out, the males become more competitive and tend to travel alone until they gather a harem together in the fall during the rutting season. 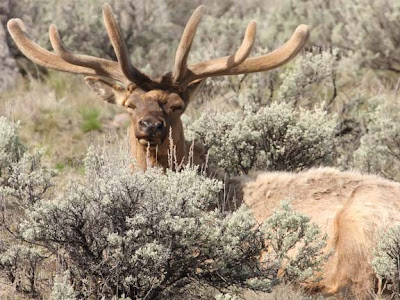 While the antlers are growing they are covered with a thin layer of skin that is called velvet. The velvet is filled with capillaries that bring blood to the antlers which help them to grow. At the end of the summer the the antlers harden and become solid bone. Since the velvet is no longer needed it begins to peel off, often with the help of a small bush or tree. 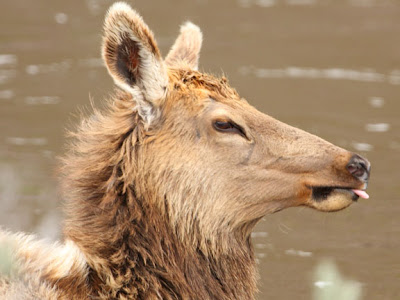 We did see a lot more cow elk then we did bulls, other then yearling males, or spikes as they are called, traveling with the cow herds. The cows seem to be more weary of people then the bulls or the bison are, or maybe they just don't like to have their picture taken like the one above who we photographed near the Madison River on our way out of the park on Wednesday evening.